With robots moving out of restricted factory settings, interaction will not be confined to trained robot operators any longer. Instead, robots are becoming more proactive and collaborative. Adoption and acceptance of such physically embodied technology is strongly related to trust. So far, trust in automation is focused on goal achievement and task efficiency. But with layman operators - or rather interaction partners - additional factors of trust development are necessary to take into account. Trust building and maintenance (and eventually recovery) are largely unexplored in dynamic, collaborative human robot interaction. An obvious challenge is that trust assessment is so far a post-hoc measure based on questionnaires. In this presentation I'm going to investigate the multilayered concept of trust for establishing succesful human robot interaction and will present examples from our work in care and industrial contexts. 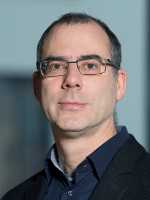 Matthias Rehm is the head of the Human Machine Interaction group at the Dept. of Architecture, Design, and Media Technology and the coordinator of the cross-departmental Human Robot Interaction Lab at the Technical Faculty of IT and Design at Aalborg University. He received his Diploma and Doctoral degrees (with honors) in 1998 and 2001 respectively from Bielefeld University in Germany. In 2008, he successfully completed his habilitation process in Informatics at the University of Augsburg in Germany. His research is focused on modeling social, affective and cultural aspects of everyday behavior for intuitive human machine interactions. He has over 120 peer reviewed publications in the area of social robotics, human machine interaction, multimodal interaction, and smart learning technology. In 2010, he became founding and steering group member of Aalborg University’s Robotics Center (http://robotics.aau.dk). In 2014 he co-founded an international, Canadian-based startup that is actively pushing the limits in smart learning technologies. In 2015, he was elected vice president for the International Association for Smart Learning Ecosystems and Regional Development (http://aslerd.org). 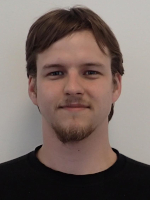 After graduating the Medialogy Masters at Aalborg University in 2014, with specialization in human-computer interaction and 3D user interfaces, Kasper Hald has done research in the field of gamification for rehabilitation. With experience in experimentation and data analysis on human factors, such as attention, search strategies and reaction time, Kasper is now working towards his PhD, researching human-robot interaction. Focusing on operator human reaction in close-proximity collaboration as well as non-obstructive interaction methods, the goal of the PhD is incorporating collaborative robots in strenuous and repetitive production lines and measuring operator trust towards robots in real time.